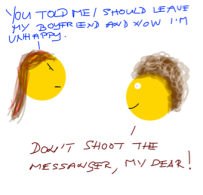 I have to admit that I’m a big fan of skeptic and debunking sites. This might seem odd, especially considering that I would almost certainly be a target for them, especially with my pseudoscience and belief in the Bach Flower Remedies.  (Which are just plants soaked in water to capture their vibrations, and yet… they work!)

But I believe they not only serve a valuable service, but are very educational.

I feel we need them.

Knowledge and understanding of how things work goes a long way to not being scammed by others.

There are just so many charlatans’ out there. I’m not talking about those who claim to have genuine psychic abilities, but those who scam people and they know they are doing it.

They prey on the vulnerability and desperation of others who are desperate for a sign of lost loved ones or are feeling alone and lonely.

I, personally, would rather such scammers be exposed, and people like myself also called into question if it helped even one person to avoid being pulled in by false hope and losing their money.

And while skeptics tend to target things that are not scientific, I also notice that they seem to somehow avoid things that can’t quite be explained.  Maybe that’s because they can’t be really explained so it’s better to focus on those things that can be.

Fact is, things that are faked are easy targets. They can, and should be debunked.  They need to be exposed.

The main problem is that most don’t want to hear it. The only ones who seem to be interested in such things are those who are already convinced it’s all fake.

It’s just astounding how people will jump to a psychic’s defense, even when said psychic is clearly shown to be wrong over and over again.

People will defend them by saying that they are just passing on messages from beyond, and they shouldn’t and can’t be held responsible for the information they are given.

Well, I beg to differ.

Let’s say, just for a moment, that these are not cold hearted and calculating phoneys that don’t have a psychic bone in their body.

Let’s say that it’s a genuine medium. (I’m going to be generous and give them the benefit of the doubt.)

Let’s assume that they really are hearing messages from beyond. Are they running them though any type of filter or do they just blurt them out and pass them on like people who pass on gossip or urban legends by e-mail without checking to see if there is any truth to them first?

Do you repeat everything you hear someone say as fact? I’d certainly hope not. You might not have all the answers, but I’d hope you’d spend a little time doing some research, or even looking at if the information received is even plausible or not.

You might then say, well, when they’re talking to an audience, they’re under pressure to perform and they don’t have time to go and check things out.

And I say in response that they have a truth filter. Their feelings and their ‘gut’ tell them when something is right. They may have learned to ignore it, but everyone certainly has that ability. (And most tend to ignore it!)

In the end, these people are responsible for what they tell others. And while I’m not saying that the person who is receiving the information has no responsibility (and they certainly do) they do listen in good faith and trust that what is being said is really being passed on from the other side.

You would not tolerate this kind of service from someone in a real profession. If you hire an electrician to fix your wiring, and he just stands there and waves his hands around for a few moments, then claim it’s all fixed and charges you $300.00, you’d kick him out of the house.

Of course, as I said, I’m being generous here and giving psychics  the benefit of the doubt  that they are genuine.

Most of the time they aren’t and are just giving what is termed a cold reading, which is a reading that has generic information that could pretty much fit anyone and more often than not, the one receiving the reading will help them clarify what is right. (This is why street psychics insist you take of your sunglasses, so they can see your eyes and reactions.)

Anyone can give a cold reading and have a very high chance of getting things right.  What’s more, these so called psychics know it.

Everyone has a responsibility for what they do and say. No one can sit back and say they don’t. A person who tells your fortune is just as responsible for what they say as the person who is receiving the information and has to decide how true it is for them.

However, it’s still heartbreaking and frustrating to watch people being duped.

Next:  There was this one time I predicted a winner…

4 thoughts on “Paranormal Series – responsibility or with great power comes…”